On Monday, July 15 2019, Gwen Young, Former Director of the Wilson Center’s Global Women’s Leadership Initiative and Women in Public Service Project led a discussion on ‘Roadmap to 50×50: Power and Parity in Women’s Leaders.’ Ms. Young was joined with Dr. Sumera Haque, who is the Director of Johns Hopkins Women’s Center at Sibley Hospital and has served on the Advisory Council for the Women in Public Service Project. This discussion was with the women rights defenders delegation from the Potohar Organization for Development Advocacy (PODA), a non-governmental organization working to promote and protect women’s rights in rural areas of Pakistan.

In her presentation, Ms. Young highlighted the importance of focusing on all five sectors of the government, namely executive, legislative, judiciary, civil service and national security. Each government sector is critical to catalyze change and cultivate a comprehensive environment for decision-making, according to Ms. Young. She underscored the urgency to develop a platform that empowers women and provides them with the agency they truly deserve, and how the Global Women’s Leadership Initiative Index is a step in this direction. Ms. Young outlined the methodology that has been designed to close the gap in agency and leadership. This framework underscores the three pillars to achieve parity—pathways, positions and power, respectively. While the first pillar addresses women’s access to positions of leadership, the second defines leadership across the five government sectors, and the third pillar measures the formal and informal powers conceded to various positions of leadership along with the quality of governance and delivery.

Ms. Young further elaborated how data has underscored critical findings—vocational training is a vital component of the education sector, part-time work enables a greater percentage of women to achieve agency and for a significant portion of females the public sector is a good starting point for diving into gaining independence. Other key findings include how the world can achieve gender parity by breaking stereotypes for women in leadership as well as changing the public perception, since the number of women in power is highly contingent on people’s perception.

The PODA group of women’s rights defenders from Pakistan spoke about their experiences and area of expertise, which ranged from law and poetry to radio and media journalism. This delegation comprised of women of all ages, who belong to different parts of the country—each activist has a unique story and perspective on women’s leadership and power. Rani Shamim from Nankana Sahib, Punjab is a grassroots activist who has changed the fate of her village by mobilizing people through Sufi folklore and poetry. Her compositions underscore the role of women in society, the importance of literacy and inculcate inter-faith harmony. While Rani musters her community to nurture an inclusive environment via the art of Sufi folklore, Hifza Bukhari the first Assistant Attorney General at the Rawalpindi District Courts uses legal instruments to win justice for survivors of domestic violence. She also specializes in child custody and family law, and is an ardent campaigner for pro-women laws in Pakistan. Other members of the delegation comprised of Misbah Nazir and Nabeela Aslam, experts in radio journalism and professional media development and radio production, respectively. These women have mastered the art of digital storytelling and listening clubs to raise awareness about mental health and how to combat gender-based violence.

Each member of this delegation is striving to gain representation for women in all realms of Pakistan’s economic, financial and social environment. They highlighted that knowledge is power and for centuries men have controlled its dissemination—now the time is up for these men as women are using their expertise to undo this longstanding patriarchal control.

Female activists like Ms. Young along with members of the Pakistani delegation are symbols of resilience, strength and empowerment. These women are shattering the glass ceiling, breaking the stereotypes of a patriarchal society to unleash other women from the shackles of fear and insecurity. They have empowered one another and every woman they represent—the future is female and all these women are most definitely leading this change. 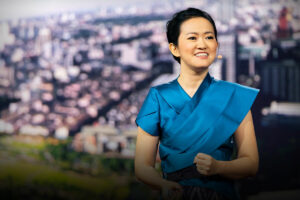 Women have always been at the forefront of making the world a better place. It is no different when it comes to the sustainable house

PrevPreviousEllysse Dick
NextConstitutional Courts in Latin America and Sub-Saharan Africa: Where are We in Terms of Parity?Next